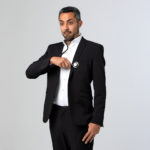 A world opens up: the Gift of Hearing

“I often said I would give up my hearing so that she can hear, if it were possible. I just want her to experience life like all the other kids. To hear the birds, and music.”

From the moment their daughter arrived in the world, Ryan and Abigail were in love. Plump, pink and perfect, she was every inch the precious newborn they’d hoped for.

Then a standard screening test suggested something wasn’t quite right with the baby’s hearing, and they were referred to a specialist audiologist for further testing. There, they discovered she had moderate to severe hearing loss.

After a four-hour basic auditory brainstem response test at Mediclinic Constantiaberg, designed to gauge the function of the inner ear, the parents were left with a worrying, confirmed diagnosis: their first-born was suffering from high-frequency hearing loss.

At just five months old, little Elle was fitted with hearing aids in both ears.

Abigail has been taking her daughter for regular follow-up tests at the Carel du Toit Centre, based at Tygerberg Hospital, where children with hearing impairment learn spoken language through a variety of technologies and therapy techniques.

Here, specialists and teachers gave the parents some bad news. Elle’s hearing was deteriorating. Untreated, she could be left completely and permanently deaf.

Abigail, who works as a teacher at the Dominican School for Deaf Children, says at first, she was heartbroken by the news. “But seeing the children at school, and the potential future you can have, I knew this is just another step in the journey. It’s something we’re going to overcome together.”

So began the family’s search for cochlear implants.

“Cochlear implant surgery is not done very often,” he says. “In fact, there are very few teams capable of performing this procedure in the country. And there are very strict criteria for who qualifies. Just because someone is deaf, doesn’t mean they will necessarily benefit from an implant.”

Elle suffers from early-onset, severe, bilateral hearing loss. This means her hearing aids granted her a degree of hearing, around 60 decibels, or the range of a normal conversation. Over time, this would only get worse.

The cochlea – a hollow, spiral-shaped bone in the inner ear – plays a key role in a person’s ability to hear, as it facilitates the process of auditory transduction: transducing sound waves into electrical impulses that the brain can interpret as distinct frequencies of sound.

Dr Van Straten says that while the exact cause of Elle’s hearing loss is unknown, it appears she was born with some form of malfunction in her cochlear hairs.

The cochlea contains around 3 500 inner hair cells, which are responsible for transforming the sound vibrations in the fluids of the cochlea into electrical signals. These are relayed, via the auditory nerve, to the auditory brainstem and auditory cortex.

A cochlear implant helps a hearing-impaired person to bypass this malfunction by creating and using electrical impulses. The procedure involves surgically implanting a neuroprosthesis to provide the patient with a modified sense of sound. Cochlear implants bypass the normal acoustic hearing process and replace it with electric signals to directly stimulate the auditory nerve.

The Cochlear Implant Unit performs anything between two and eight cochlear implants per month.

“During the surgery, we made a clean incision behind the ear, and drilled a hole into the back part of the temporal bone of the skull, just behind the inner ear,” Dr Van Straten explains. “This gives us access to a very small space, which we refer to as ‘the round window’, within the mesotympanum. There, we can place a tiny electrode within the cochlea.”

The operation took between four and five hours.

This is not the end of Elle’s journey to full hearing, however. “After surgery these patients go through quite a rigorous rehabilitation process, where they learn and train themselves to hear,” Dr Van Straten adds. “And over time, they really do very well – they expand to a wide range of hearing, and develop normal speech, which in turn empowers them to attend and function well in a normal school environment.”

That’s why it’s so important these hearing defects are picked up early enough in life for doctors to intervene effectively. “If we can operate when the patient is under a year old, for example, we really see optimal results.”

Dr Van Straten expects a good outcome. “Cochlear implants may be the single most life-changing prosthesis available in medicine. They can take a person who can’t hear properly, can’t communicate, and put them on track to succeed in a speaking world.”

Her father, Ryan, is relieved. “When we had our youngest daughter, Nova, I could see how vastly different her and Elle’s hearing journeys were,” he says. “When I really thought about it one day, I just broke down, because I really want that for her as well.”

10 positive changes during the pandemic

“I got coronavirus for Christmas”